I was born in New Orleans in 1961, four days after John F. Kennedy took the Oath of Office. I lived in New Orleans for the first twenty years of my life, leaving in 1981. I relocated to Minneapolis, at the opposite end of the Mississippi River, and eventually settled in the western suburb of Saint Louis Park. I live with a roommate, Jim Dayton, and I constantly need to explain that Jim (a) is not my husband or even my boyfriend, and (b) that he’s no relation to former Governor Mark Dayton.


I come from a large Catholic family. There are six of us in all, starting with my brother Bill and ending with me. That’s about a ten year age range. Most of my siblings grew up to be Republicans, and the so-called “Election” of 2016 has created a major wedge between us. Fortunately, I live over a thousand miles from them in a deep blue state. I’m also closer to Canada… just in case.

I am the youngest of my siblings, and if we all live to be over a hundred they’ll refer to me as “the baby.” As of this writing, I am the only one under sixty. Growing up was rough for me. In addition to being walked all over by my siblings because I was the youngest, I was also relentlessly taunted in school because the other kids thought it funny that my last name is Butts.

One of my life-long ambitions, since I first learned to read and write, was to be a writer. I wrote my first short story, The Flying Rabbit, when I was five. Fortunately, any remaining copies my mother might embarrass me with someday were probably destroyed by Hurricane Katrina. During high school I practiced my storytelling skills with Hardy Boys type detective stories using kids from my school as my characters. After discovering science fiction fandom at my first convention (or “con”) I took up writing fan fiction, mostly based on my favorite television series, Space: 1999. (I’m still semi-active in fandom, and a little notorious for an argument I got into in 2000 with Star Trek’s Grace Lee Whitney, a homophobic b*tch who called me “an abomination.”)

It took me half a century to realize my dream of being a published author. My first novel, Grunch Road, was published in 2011. It’s based on a ghost story from old New Orleans, but it ended up being more about my protagonist, a high school newspaper reporter I liked so much that I wrote a four-book series where he goes to college, all against the historical backdrop of Louisiana in the 1970s (including the same hurricane that also figures into Forrest Gump). 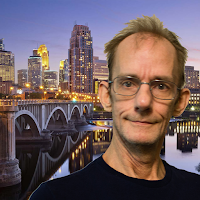 My most recent novel, Love at Second Sight, is a total departure from my previous works, set in Minneapolis around the time of the GLBT Pride Festival immediately following the Supreme Court ruling that made same-sex marriage legal in all fifty states. It’s the story of a young gay telepath who gets gay bashed, and covertly uses his abilities to seek justice against his attackers. A lot of my friends who’ve read it liked it a lot. I just wish they’d post those reviews on Amazon.

All of my books are self-published, but that doesn’t stunt my dreams. One recent best-seller started out as a self-published novel: The Martian by Andy Weir. I’m not in it for the money anyway. I just like to tell a story.