Dancing With The Reaper 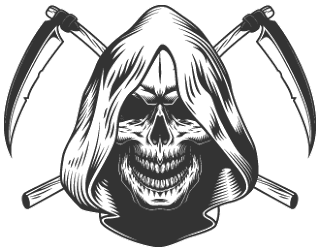 If there’s one thing I’ve gotten used to in the last twenty-seven years, it’d the fact that I’m dying. I’ve been dying for the last fifty eight years, and I don’t see any reason to stop now. I’ve come close more than a few times… from an operating table in 1992 while doctors sewed up a twelve-inch gash someone carved down my back with a box cutter, to pneumocystis in 2005 which sent my fever spiking to 104.6°, to lingering side effects from chemotherapy in 2014, causing me to waste away to 89½ pounds. I’ve rang the grim reaper’s doorbell more times than a Mormon missionary. I’ve fought a constant battle against AIDS since 1992 and gone two for two with cancer. I’ve even survived two major hurricanes and a tornado.

Now the diagnoses are starting to pile up. Something I brought home from Europe last year landed me in the hospital for ten days last September. They never did figure out what it was, until I flunked my pulmonary function tests last year and got diagnosed with COPD. It came as no surprise: after a forty-year smoking history and a relapse in Europe, where the cancer sticks are particularly nasty, it was a matter of when, not if. But something new popped up out of the blue. While starting respiratory therapy, a routine check of my vital signs showed that my blood pressure was 206/155. (Yeow!) That’s bad, like red alert bad. It’s “a stroke about to happen” bad. Fortunately this happened at physical therapy and there just happened to be a hospital attached to it, so they ran, not walked me to the Emergency Room where I spent six hours mainlining labetolol. They finally got me down to 177/117 before they gave me some blood pressure meds and sent me home. Now I’m monitoring my blood pressure several times daily and wondering if I even want to know what card the gods are going to deal me next.

There’s a lesson here, folks. Just because you feel fine, it doesn’t mean you are fine. See your doctor now and then, just to make sure.
at July 12, 2019