Hurricanes were a way of life when I was growing up in New Orleans. My life has been touched by three major storms: Betsy (1964), Camille (1969), and to a lesser degree, Carmen (1974). I had left New Orleans by the time Katrina came along.

It’s an undisputed fact that hurricanes are getting bigger and stronger. The three storms I lived through fell during the “peak window” of hurricane season, from August 15 to September 15. Labor day weekend is the bulls-eye. Hurricanes are named alphabetically: this is significant when you consider that I survived Betsy, Camille, and Carmen during the same point in the season we’re now seeing storms named Katrina, Isaac, and Nate. Mathematically, that’s about a tenfold increase in hurricane activity in the last forty years. I’m just sayin’. Point it out to the next climate change denier you meet. 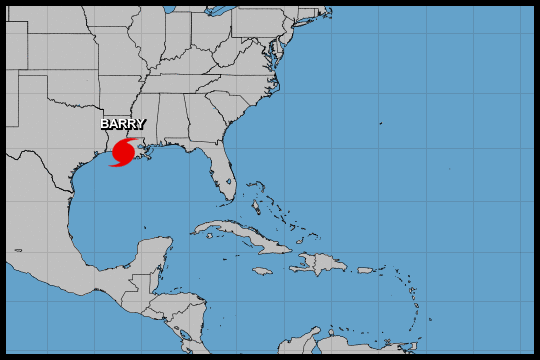 Right now we’ve all got our eyes on the Louisiana gulf coast, where Hurricane Barry is coming along somewhere south of Lafayette. My eldest brother and his wife are in its cross-hairs, as are my neice and her husband, but Lafayette’s pretty far inland. The scary part is the storm surge that’s going to be driven into New Orleans, which is already flooded from the rising Mississippi River and all the rain they’ve already gotten.