Welcome to the Fourth Reich

Godwin’s Law states that as an online discussion progresses, it becomes inevitable that someone or something will eventually be compared to Adolf Hitler or the Nazis, regardless of the original topic. But that’s not what’s going on here. Calling members of the so-called alt-right (or as I prefer to call them, alt-wrong) Nazis isn’t just an ad hominem in this case. It’s the literal truth. They walk with their arms raised in Nazi salutes and carry the Nazi flag proudly through the streets. Even one of Richard Spencer’s favorite battle cries — “hail victory” — is literally “Sieg Heil” translated from German! All they need to do now is learn how to goose-step!

Does it feel like we’re living in the Twilight Zone? Because we literally are. Rod Serling saw this day coming forty-four years ago, and tried to warn us. 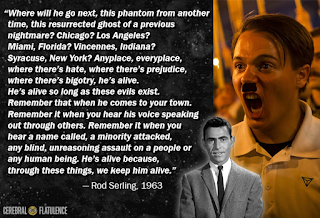 The so-called “leadership” from our so-called “president” has been, to say the least, almost more insulting than his silence. His response has been clueless and tone-deaf. He has to be shamed into saying the right thing (in the extreme close-up of his press conference, I half expected there to be a gun at his head, or maybe his fingers were crossed behind his back? He had the same look in his eyes as those prisoners forced to make propaganda statements against their will. Even if I had bought it at the time, he had to go right back and double down on his apologist crap, blaming both sides and asking why we aren’t taking down statues of George Washington and Thomas Jefferson. So here’s a little history lesson for him.

The removal of Confederate monuments is not about slavery. It’s about treason. Yes, George Washington and Thomas Jefferson owned slaves. But they never declared war on the United States. They built this nation, while man like Jefferson Davis and Robert E. Lee set out to destroy it. Just like that lunatic in Germany with the funny mustache whose flag they also pledge allegiance to. That’s the real irony here, isn’t it? Marching under the flag of the Confederacy is one thing, but really, the Nazi “blood flag?” Really? Really?

“Oh, but I wasn't carryin’ a Nazi flag!” whines the poor little snowflake who’s been disowned by his family and fired from his job. He just doesn’t get it. If these rebel flag-wavers were half the Americans they claimed to be, they’d have stomped those carrying Nazi flags and symbols into the ground. (They were the bad guys, remember? We had a war about this. The whole world was in on it, remember?) But instead, they’ve made a deal with the devil. If both sides are to blame, then why did their side draw the first (and so far only) blood? 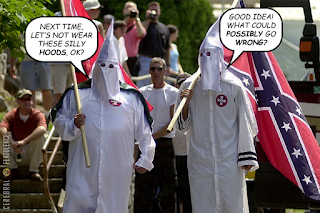 I fully support the actions of those on the internet who are giving names to these faces, and when I hear of one being rebuffed by the rest of decent society, losing their jobs and families, the schadenfreude is exquisite. (How many of them had grandfathers who fought Hitler?) But I can’t make this any more clear: we should not respond to their hatred with violence. As repulsive as they are, we have to take the high ground here. (And if you must punch one out, be sure to keep your wrist straight so you don’t injure yourself.) The only respose to idiots like that is ridicule. Don’t give them the satisfaction of seeing your anger. And definitely don’t kill any of them. They’re not worth going to prison for, and the last thing we need is for them to have a martyr. It’s far more satisfying to expose them to the light, so they just wish they were dead. It’s their own fault. They laid down with dogs. It’s not our fault they got up with fleas.
at August 16, 2017